Written in cooperation with IHG Hotels.

The story of Dubai is one of change and modernization. One of the seven emirates that makes up the United Arab Emirates, the first mention of Dubai was in 1095 in the Book of Geography. In ancient times, it appears few settlements existed in this desert region, but it was a natural pathway for trade between the East and West.

The city went through several metamorphoses as a pearl farming region and fishing village over the centuries, all while continuing to attract traders and merchants due to its lower tax bracket and prime location. However, everything changed in 1966 when oil was discovered, moving the city into an economic focal point of the region.

The city reinvented itself again as a huge influx of workers swarmed the area. Much credit needs to be given to the city planners as they realized there were relatively low oil supplies and focused on alternate means of revenue, such as tourism and real estate. Enter modern Dubai, home to an endless stream of activities and hotel choices to fit every taste and budget.

Hailed as one of the fastest growing cities in the world, Dubai also offers the worlds tallest building with the completion of Burj Khalifa. This skyscraper, opened in 2010, is 160 stories tall and stands an astonishing 2,722 feet high. The records are impressive; highest building, highest skyscraper, highest occupied floor, highest nightclub, highest restaurant, and the list goes on and on. 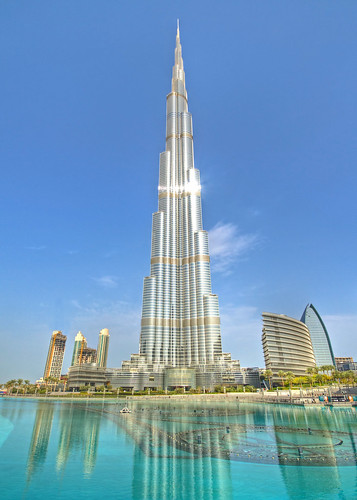 Dubai also presents a truly unique sight for visitors at Palm Island. While all three proposed islands are not yet complete, the genius behind their conception is a story in itself. Faced with a further decrease in oil production and an increasing number of tourists, the Prime Minister realized something needed to be done to increase the availability of shoreline. Enter an engineering design of staggering proportions.  Construction of the first of the islands went long over schedule, and it’s 17 “fronds” caused some concern by ending up smaller than projected, and yet this marvel of construction is none the less impressive, with the Middle East’s first monorail and a six-lane freeway underneath the water!

Skiing in the desert? In Dubai the answer is YES. Ski Dubai, an indoor ski hill, is located in the Mall of Emirates, one of the largest shopping centers in the world. Five different runs can support everyone from beginners to expert skiers, and there is even a tubing hill for the young ones. To make the attraction even more appealing, you can visit the resident king penguins colony, also located in the mall. The appealing restaurants in the ski center lend to the mountain tone with their Alpine Chalet decor. Fun for the whole family, Ski Dubai is a first in the Middle East. 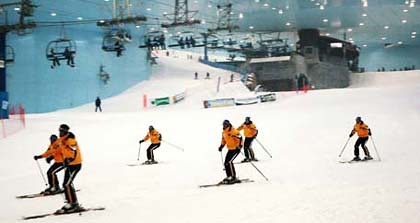 These are just a few of the dozens of reasons to visit Dubai. This electric, modern city offers water sports, shopping, museums, nightlife and fine dining. Dubai invites you to come and appreciate the vibrant pulse of an ever-evolving city.